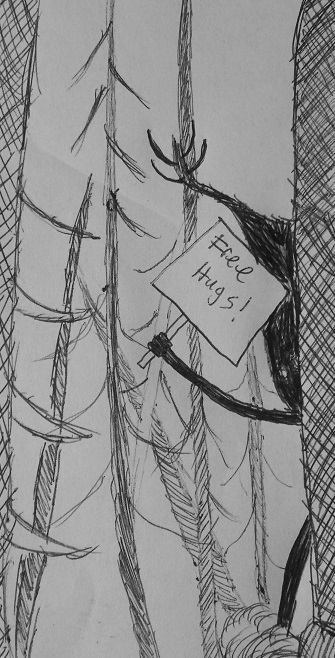 Last week, we took a look at the book version of ‘The Ritual.’ Today, let’s take a look at the film adaptation and see what writers can learn from the big (small?) screen version of the novel:

Consider starting your story with a lighthearted touch, then immediately shifting to horror

‘The Ritual’ begins with Luke and the others (and newcomer Rob) having a typical guy’s night out with drinks, joking, and taking in a city’s nightlife. I first thought it was going to be a predictable scene of the group wanting to get away from their boring lives, but was quickly proven wrong when Luke and Rob stumble into a robbery, and Rob is killed. Only then does the film cut to the outskirts of Sweden’s Forest of Death six months later.

The brilliance of this sequence is how it plays with our expectations: We expect it to be another buddy-movie opening, but by then shifting into horror, it grabs our attention like a slap to the face. Consider doing the same subversion in your story: while the first part risks having the viewer say, ‘Oh great, not another cliched opening,’ the unexpected always gets their attention, letting them know that this isn’t going to turn out the way they think.

Consider having your characters learn to overcome fear

It’s standard advice for writers to have characters change and grow throughout their stories, giving readers the sense that their heroes are capable of learning and growing from both triumph and failure. But what kind of arc should they have? Here, Luke’s arc takes him from being a coward (not helping Rob when he’s being beaten by thugs), to learning to face fear (in this instance, a forest god who will turn you into a flayed flesh-flag if you don’t worship her).

One advantage of having your character learning to stand up for themselves is that everyone can relate to it. Who among us hasn’t felt small and afraid when faced with bullies, angry parents, or enraged employers? And who hasn’t felt the elation of finally standing your ground and fighting back? Having your characters do the same is almost guaranteed to be a fist-pumping, ‘hell yeah!’ moment because we know the struggle it takes to get to that point.

(In all fairness, though, you can’t blame Luke for not stepping in to help in the market; a glass bottle wouldn’t do much against two thugs who aren’t afraid to kill to get what they want.)

Consider having the victim make everything worse for everyone else

After injuring his knee early in the hike, Dom wants nothing more than to get out of the forest. But while his pig-headed stubbornness to get out as quickly as possible is understandable and relatable, it has the side effect of leading almost everyone else to their doom. Had the group just turned back, they probably would have gotten out of the forest alive. Such a contrast creates mixed emotions for your audience: they can sympathize with the victim who just wants to live, but also be angry at him/her for making things worse for everyone else by refusing to listen to reason.

About halfway through ‘The Ritual,’ Luke and the others find an abandoned tent that belonged to Anna Erikson, a woman who went missing in 1984. While this mystery is never solved, it does engage our imagination: What happened to Anna? Did she escape the forest? Did Moder kill her? Or did she join the cult and worship Moder? It may be possible that the villager who explains to Luke who Moder is Anna. Either way, the ambiguity behind the mystery helps reinforce the fact that Moder has been active for a very long time.

It’s important to note that this mystery is a small one, and not important to the plot. Had it been the main focus of the story, where Luke and the others heading to the forest to find this woman, then it would need to be solved.

Consider hearing something horrible instead of seeing it

It’s common to hear a monster in a creature feature long before it’s seen, and for good reason: Hearing an unearthly beast allows the reader’s/viewer’s imaginations to run wild, and making them lean close the screen or the page in hopes of catching even the smallest glimpse of the monster. However, using sound instead of visuals can also be effective in many other situations. In ‘The Ritual,’ it’s used to chilling effect when Phil is dragged upstairs where we hear him shrieking. We don’t see what’s going on, which makes us wonder what’s terrifying him so much. Torture devices? Other captives who fought back and were mutilated? A big, fat, naked man trying to seduce him?

By leaving something unseen, even if it’s not a monster, you can turbocharge your audience’s imagination… and make their skin crawl as they debate whether they want to see the unseen horror or not.

Consider having your characters sacrifice something for their freedom

In many stories where a character has to escape a location (a cell, a locked room, etc.) they manage to get out of their restraints without any pain. But if you want to turn up the tension, and make your audience squirm, consider having your characters sacrifice something to achieve that freedom. Here, Luke has to sacrifice his thumb by breaking it in order to free himself from his bindings.

Part of fiction’s appeal is imagining ourselves in the place of our heroes and imagining us accomplishing what they do, escaping from impossible situations included. Why not make them squirm by having them wonder if they’d be able to sacrifice a body part to escape. Would they be willing to break their arm? Lose an ear? How about an eye?

Consider having your final confrontation be a battle of wills, not physical strength

In my opinion, the most interesting thing ‘The Ritual’ changes from the book is the final showdown between Luke and Moder. In the book’s climax, the two collide in a van, and Luke drives her off with a pocketknife. Here, however, Moder tries to force Luke to worship her, presumably so she can continue to live from the strength of his prayers. In a physical fight, Luke is no match for Moder, but she’s in a difficult situation: if she kills Luke, she loses her last chance of getting a follower. Thus, Luke finally gains his resolve and refuses to kneel. And thanks to an axe-to-the-face moment, he manages to defeat Moder: not by killing her, but by leaving her powerless, alone, and trapped in a prison she cannot leave.

It’s a fascinating twist on the standard climax of having hero and monster fight in a duel to the death. Here, both parties survive, but Luke is still the winner. ‘The Ritual’ is proof that not every confrontation needs to involve weapons, fists, and pitting strength against strength. Sometimes the most amazing duels are fought with words and wills, where even the weakest in body can stand up to the biggest of bullies.

When writing a story about monsters, a good way to quickly suck viewers in is to start off with a familiar plot, only to quickly swerve into horror territory, setting up a story where the main character has to learn to stand up for himself and face his fears while dealing with injured companions who make things worse for everyone due to their stubbornness, creepy mysteries that they’ll never solve, unseen horrors that he doesn’t want to face, enduring great pain to gain freedom from captivity, and facing the beast and defeating it with courage and their will instead of weapons and strength.

BONUS: When all else fails, punch the evil old woman