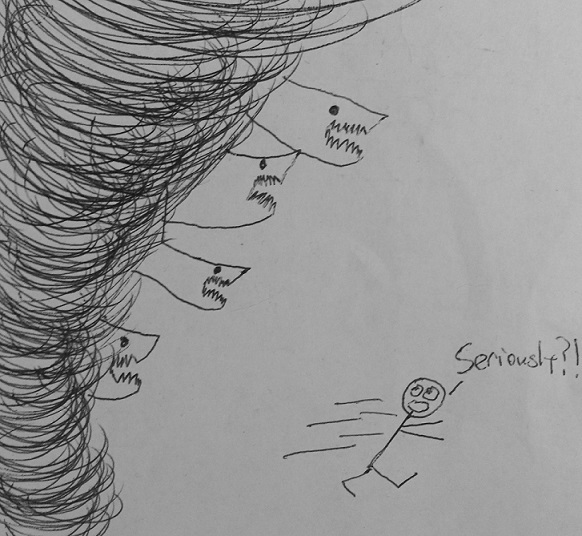 Every so often, an idea comes to Hollywood: an idea that changes the world of cinema forever, that revolutionizes the artform, that makes people look at life through a new perspective.

Sharknado is one of those movies.

Okay, perhaps it’s not a life-changer. It may not make it onto AFI’s top 100 movies of all times list, but there’s no denying that in a genre as stuffed as the killer shark one, the idea of shark-filled tornadoes stands out, and somehow lasted for six films, featuring mech suits, worldwide devastation, sending the sharks into outer space, and even time travel. It’s impressive that a goofy, made-for-tv movie turned into a series that lasted as long as it did.

With that said, let’s take a look at where it all began, and see what we can learn from one of the goofiest shark films ever made.

No monster, no matter how outrageous, is out of bounds when it comes to storytelling

We’ve had robot sharks, snow sharks, countless giant sharks, and even multi-headed sharks in fiction over the years. In a crowded genre, you need to really work to stand out, and Sharknado manages this with a premise that is as impossible as it is cool.

A good rule of thumb: If your monster/disaster idea makes people stop and do a double take, that’s a good thing, because they’ll want to know how such an outlandish beast could work out.

While he would later become the stoic everyman who’s thrust into increasingly absurd scenarios, protagonist Fin Shepard isn’t all that memorable here, along with most of the characters. While he is divorced and risks everything to save his family from the sharks, Finn feels like so many other protagonists we’ve seen in these types of films over the years, and does little to stand out, being upstaged by Gerald. At first glance, he appears to be a stereotypical middle-aged drunk and womanizer, but we soon learn that he’s a lonely man who’s too old to enjoy surfing anymore, the one joy he had in his life. Furthermore, instead of being a coward who runs at the first sign of trouble, he stays and does what he can to help. These contrasts make him interesting, and one of the people I was hoping would make it to the end. (Sadly, bar stools just aren’t enough to keep hungry sharks at bay.)

The takeaway? Protagonists who care about their family are easy to do, but well-meaning losers can be far more interesting.

Be cautious with padding action sequences

About halfway through the film, Sharknado has a brief police chase, in which Fin and other survivors fight to reach his daughter while outrunning the cops. While it’s understandable that a father would do anything to reach his daughter, it’s an odd sequence for a film about sharks in tornadoes.

While it’s inevitable that you may have to pad your story at some point to kill time, try making it appropriate to the style of the story. In this instance, the chase scene could have started off with the police chasing Fin, only to then run away with him as sharks start chasing both vehicles.

Save the big event for the climax

Sharknado deserves credit for resisting the urge to unleash its title creation early in the film, instead slowly building up to the big event via the hurricane, then flooding, and then finally unleashing the title monster at the end, and then amping it up even more by having not one, not two, but three sharknadoes for our protagonists to deal with. Had the film unleashed the sharknado in the first act, or even the second, then it would have felt like it was climaxing too early.

Like monster movies, it’s a wise idea to start slowly in our disaster movies and slowly build up to the main event with ever-escalating events, whether it’s natural disasters or monsters out to gobble up everyone in your group. If you must have the disaster/monster show up early, consider having it only appear briefly, and then have it inflict the most damage in the third act.

Keep your focus on the climax once it starts.

When the climax of your story kicks into high gear, all other concerns become secondary: When the Titanic hit the iceberg, Rose and Jack focus everything on surviving. When the meteor in Deep Impact is less than an hour from hitting the earth, all efforts go towards survival or tying up one final loose end before death comes, and when the Death Star is about to blow up Yavin in Star Wars: Episode IV – A New Hope, everyone puts everything aside to deal with it. In Sharknado’s case, Fin and friends focus their attention on stopping the three sharknadoes from devouring Los Angeles.

However, while Fin and the others construct bombs to drop into the sharknadoes, the film slows down to give Nova time to detail her backstory and why she doesn’t like sharks. While character development is always good, putting her past here was a mistake: We want to see our heroes take on the sharknadoes, and stopping to learn about someone’s backstory puts the brakes on that excitement.

Though they may be impractical as weapons in real life, chainsaws are one of the most awesome weapons a character can wield in fiction: it’s noisy, intimidating, and satisfies the primal bloodlust of have a weapon that can obliterate an opponent and leave you looking like a badass. In other words, chainsaws are cool, and Sharknado doesn’t disappoint in its most famous scene, where Finn, to save his daughter, shoves her to safety and leaps into the mouth of a great White Shark, carving it up and slicing his way free from the inside, saving his girlfriend in the process. It’s ludicrous, awesome, and funny all at once, and arguably wouldn’t have worked with any other weapon.

In your own stories, as long as it isn’t out of place with the tone (such as a story that’s trying to be as realistic as possible), having your characters wield a chainsaw in combat is all but guaranteed to get your audience’s attention and end up with them thinking, ‘hell yeah!’ at seeing the antagonist be dispatched with said weapon.

When it comes to making monster stories, there’s no limit as to how ridiculous they can be, but take care to make sure we have interesting characters to fight them, while doing a steady buildup to the monster’s big rampage scene (being careful not to pad the story too much, or giving background when it’s not appropriate), and making sure the story focuses on that rampage when we reach that point, preferably with a chainsaw or equally awesome weapon.

One thought on “What We Can Learn from ‘Sharknado’”