Four months ago, I had no interest in the Friday the 13th series. Yes, I had seen ‘Freddy vs Jason’ on a whim, and I knew that Jason was a near-invincible zombie killer who had slaughtered hundreds of horny teenagers over the years, but that was the extent of my knowledge and interest in his movies. But as I mentioned in my overview of the 1980 movie, I came across a fan-made adaptation of said film. Out of curiosity, I gave it a try, and was hooked, making me curious to see how it compared to the film and the 2009 remake. Today, we’re going to take a look a this adaptation: A fan comic re-imagening the events of ‘Friday the 13th’:

This comic, created by artist David Hopkins – a furry artist best known for his long running web comic, ‘Jack’ – immediately stands out because the cast are no longer human, but anthropomorphic animals. But don’t let the sight of cute cartoon animals in people clothes fool you: This is easily the bloodiest take on the original ‘Friday’ story. Much like the 1980 movie, the comic tells the origin story of Jason Voorhees and his mother. And, like the best remakes, it takes the original story and reinterprets it in interesting ways. Here, there’s no twenty-year gap between Jason’s death and his mother’s rampage, and unlike the 1980 and 2009 films, where Jason only pops up after Pamela is killed, both of them work together throughout the story to kill counselors, acting like a ghoulish version of Bonnie and Clyde. The other, most significant addition to this take on the story is it’s religious tone: While Jason’s survival was unexplained in the original film, his resurrection here is due to Pamela making a deal with the devil to bring him back to life (in a smart move, the devil is never heard or seen, making him an unseen menace).

The compressed timeline and supernatural elements gives this version of ‘Friday’ refreshingly different from the original, but what elevates it above being a simple slasher story is how most of its focus is on Pamela Voorhees. While she infamously only appeared in the final act of the original film without any foreshadowing, the comic makes her the main character instead of the counselors, letting us learn much more about her: In this interpretation, Pamela is a former member of a group of devil worshippers who eventually left and became a Christian, who then suffers from a horrific crisis of faith when Jason dies, and then backsliding when her pleas to God to bring Jason back aren’t answered.

This expanded focus on Pamela turns her from an already compelling and relatable character into a complex, fascinating individual who is bloodthirsty and ruthless, deeply loving, misguided, and even regretful about what she’s done. It’s easy to understand and related to her pain and goals for vengeance, even as she kills innocent counselors in truly horrific ways. 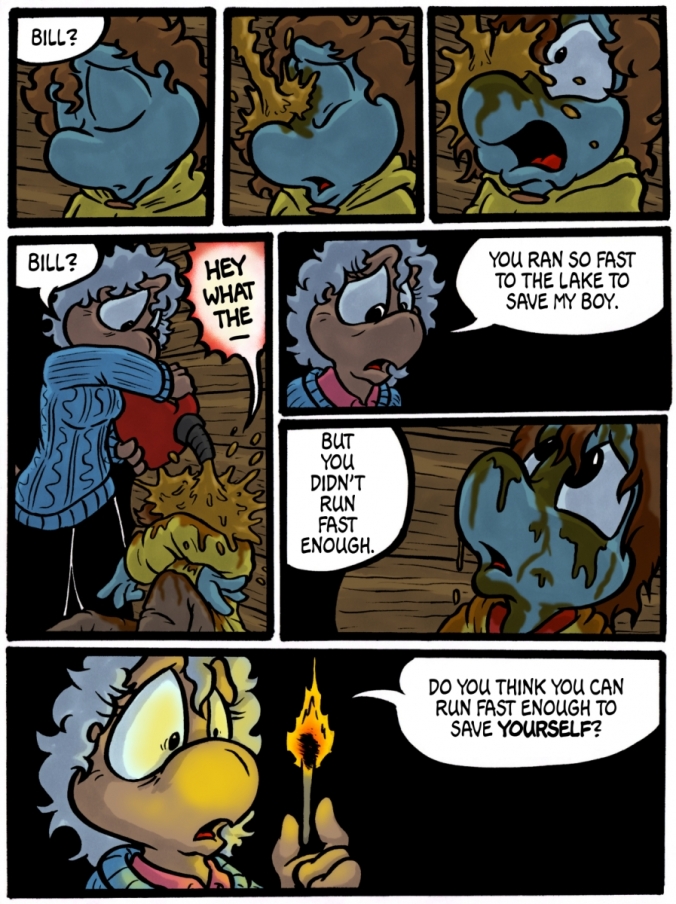 Yet, despite all the horror and the gore here, there’s a strong undercurrent of innocence and tragedy here: there are no true villains in the story, only victims. Yes, Pamela stabs, burns, impales, and disembowels teenagers, but only to bring her son back, and ensure that no other children will die from the counselor’s stupidity. The counselors, while having severe lapses in judgement, aren’t evil and care about the kids under their care. Jason becomes a killer, but only at his mother’s urging. And in the end, Pamela has a moment of clarity about what she’s done, but dies and is damned. Jason loses his mother, and Alice is left shell-shocked and a nervous wreck. No one wins, and everyone suffers, turning ‘Friday’ into a tragedy of poor choices, suffering, and loss… but, you know, with cartoon animals!

While I prefer this comic over the 1980 and 2009 films, it does have a few missteps: At one point, Pamela tells Jason that they can kill everyone in the world, which doesn’t make much sense for a woman who initially only wanted to leave Crystal Lake with Jason, and then wanted to get revenge on a specific group of individuals for letting Jason die. Pamela’s famous scene, where she seems to channel Jason while trying to kill Alice doesn’t make any sense here: the film implied that Pamela was losing her mind, but in the comic Jason is right outside the building, making the line and Pamela’s seeming possession unnecessary and confusing.

Still, despite these missteps, this adaptation of ‘Friday’ elevates itself above standard slasher fare by focusing on Pamela and giving her a depth and richness that the films haven’t. Coupled with the grotesque, bloody kills, tight focus, and good pacing, this re-imagining of Jason’s origins is, in my opinion, the best of the three ‘Friday’ origin stories. If you’re looking for a slasher story with an uncommon depth, or a great ‘Friday’ tale, this will easily satisfy that need. 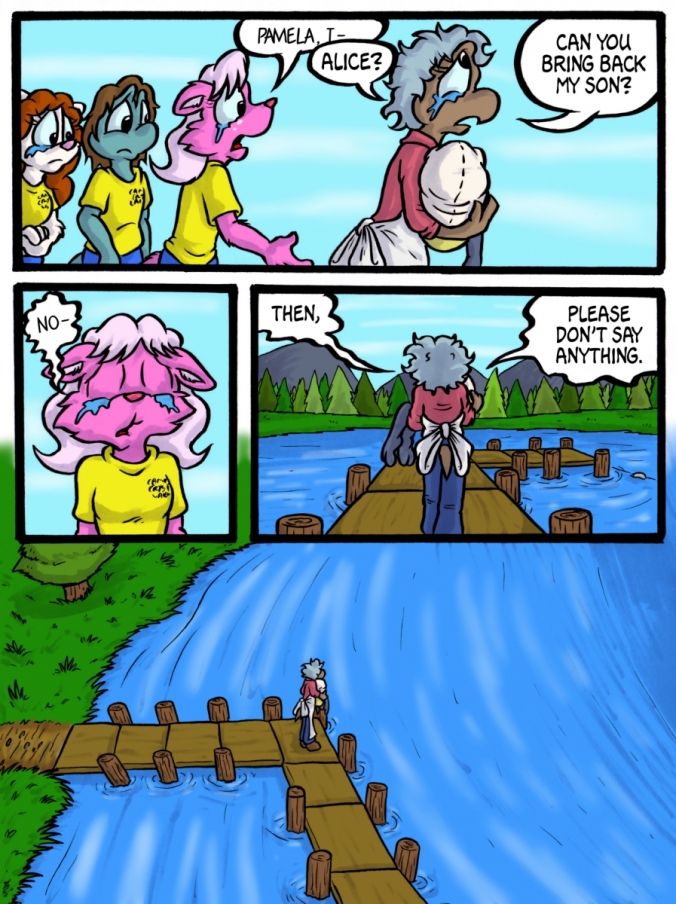 Now that we’ve taken a look at all three of Jason’s origin stories, all that remains is to done final summary of them all and see what lessons they offer for the writer, a task we’ll dive into next week.

(All art on this page is posted with permission from Mr. Hopkins)

One thought on “Three Fridays: A Comparison of ‘Friday the 13th’ – Part 3”